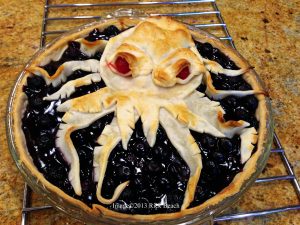 I wish I could take credit for this idea, or even the name someone pegged this with. Both were found floating around on Facebook. I can only take credit for baking one of these in a Dutch Oven using charcoal. For all I know that has already been done. The pie I happened to see before attempting this only had a photo and no recipe. So I set off to try and produce the pie. I also wanted my own photo of the trophy…dish… in this case. Blueberries were used to create the desired contrast for the photo. Any fruit pie would work. The one I saw, I assume had used blueberries for the eyes. I happened to have a partial left over jar of Maraschino Cherries. The remainder of a jar left over from baking a Pineapple upside down cake in a Dutch Oven. The recipe I provide here was done in a Dutch Oven as well. This pie was baked in a glass 9 inch pie dish, raised up off the bottom of a 12 inch, deep style, Cast Iron Dutch oven, via an inverted second pie tin. Several layers of aluminum foil were put in on top of the pie tin prior to placing the glass pie plate containing the raw pie. The foil left long enough to go up the sides. The foil can be folded over in case the top starts browning too fast, but is mostly to assist in lifting out the pie once baking is complete. Enough coals to create 400° heat. In our case, 9 coals on the bottom, and 19 on the top lid. All coals arranged at the far perimeter of the bottom, and the lid.
Print Recipe
Prep Time 30 mins
Cook Time 40 mins
Total Time 2 hrs 10 mins
Servings 1 Pie