A donation to TheDutchOvenCook.com today.  (A big Thank You to Ed McCormick of Las Vegas)

This came short notice….the way things like this often do.   In hindsight had I had more time to think about this, and known some of my contacts would not be as interested as I had hoped.  I may have passed.

The timing was good for me to do the pick-up.  It was an adventure none the less.

We shuttled broken and torn bags of charcoal, from the back of a semi-trailer for a good two hours. 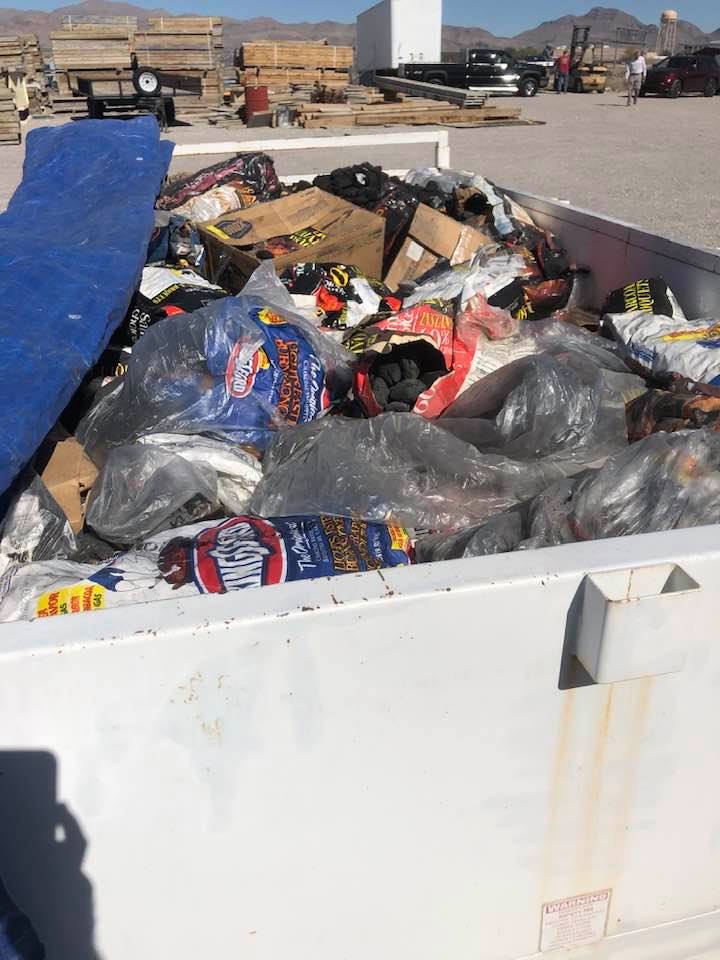 Moving all the charcoal onto my (Tri-axle) dump trailer. Pallet after pallet of boxed up ripped bags.  Each pallet and cardboard container was wrapped in shipping shrink plastic. There was two layers of pallets so the cardboard containers on the bottom were crushed.  (Thank you John/ with Ed) for helping dig through all of that and for slinging lots of charcoal.

Somewhere about a quarter of the way into the semi-trailer the bee’s showed up.   I took three hits.  Two Benadryl later I was back in there.  I hate those little buggers.  They left stingers so they were some kind of bee and not yellow jackets.   We never did figure out were we stirred them up.  We thought maybe they were under the trailer?

What do you do with several thousand pounds of charcoal?  That was an initial eye ball estimate.  After unloading much of it in buckets and garbage cans later in the day, I believe it may have been in excess of 4000lbs.

What started out as a gifting idea to supply 3 state parks we attend Dutch Oven Cook Off events at, with free charcoal. Turned into they either didn’t want any. Or they only want a mere couple hundred pounds.

I needed to get the majority of this off the trailer before I drive a load up to Cathedral Gorge State Park. Too much weight, and they didn’t want the volume I have anyway.

The Old Mormon Fort SP in Las Vegas took as much as they wanted.  We had hoped double or triple of what they took.  LOL

We put the word out to our Dutch Oven friends, FB Market Place and Craigslist. Thankfully enough people showed up at my house to get this down to a manageable load.  I think 3000 lbs or so was off loaded.  We stopped at 6:30pm and put the trailer to bed.  Thanks to all that toted some away!

The remainder of the charcoal I am hauling up to Cathedral Gorge SP next week (165 mile on way).  Perhaps tent camp a night while I am there to give this adventure an ending bright spot.